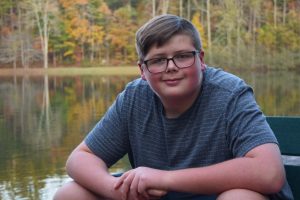 The headaches were growing progressively worse for Ian Honcoop. It was September 2017, and the 12-year-old Boy Scout, just weeks into the first semester of his seventh-grade year, was in such severe pain that he couldn’t concentrate and his eyesight was failing.

But the worst was yet to come.

His first MRI and ensuing surgery revealed an intermittently bleeding arachnoid cyst (a fluid-filled sac that can develop in the head or around the spinal cord) inside his brain. But it wasn’t until other blood clots began to appear that doctors came to suspect the cause: a rare, genetic blood-clotting disorder known as Factor V Leiden.

Over the next 18 months, the Cumberland County youth lost the use of the left side of his body. He struggled with his speech and suffered from blood clots in his brain, arms, legs and lungs. He had numerous hospitalizations and ER visits, and eventually lost a large portion of his skull to infection.

But through it all, Ian did not lose his sense of humor. After his first brain surgery, he took advantage of his freshly shaven head to top off his “Uncle Fester” Halloween costume. And later, after the craniotomy, he teasingly told a friend, “Hey, look! I can touch my brain!”

More than anything, he emerged from the multiple surgeries as an inspiration to his fellow Scouts, classmates and his tiny community of Ozone.

Churches held benefit chili suppers and bake sales. The Big Emory Baptist Association built a wheelchair ramp in anticipation of his return home. Teachers made sure he didn’t fall too far behind. His father, Steven, a cloud engineer, helped Ian keep up with math and science assignments. A coffee shop decorated its Christmas tree with paper “Snowflakes for Ian” made by more than 200 customers. Countless friends donated to a crowd-funding page to help with expenses not covered by insurance.

“It was hard for me to put aside self-reliant pride to accept the generosity that flowed toward us unceasingly,” said his mother, Jill Honcoop. “But someone reminded me that my prayers for the Lord’s support can be seen in the hands of His people reaching out and supporting us in the ways they could.” 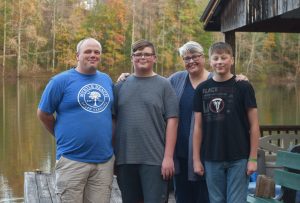 “I’m perfectly fine now, all because of Patricia Neal inpatient and Patricia Neal outpatient at Roane,” said Ian recently. “They were both great!”

For three and a half weeks, Ian struggled more than six hours a day in wheelchairs and with walkers as he worked with physical therapists, speech-language therapists and occupational therapists. He learned to shower, tie his shoes and get up from the floor without assistance. He worked with a robot to rebuild neural pathways, and engaged in “spray string” battles with therapists and Mary Dillon, MD, medical director of PNRC.

“Ian had an amazing work ethic and family support. He was very mature and understood what he needed to do,” said Heather Moore, the physical therapist who worked most closely with Ian. “I felt that he was set for success. It was a matter of time.”

Ian admits that his resolve wavered at times. “Sometimes, it would be like ‘I can do this!’ Then, it would just switch to ‘Why do I need to be here? Should I really be here? I want to go home.’”

Ian said the most difficult part of the ordeal was being in the hospital and away from home. “Oh, and taking blood thinner shots,” he added. “I’m ‘needle phobic’ and I had to take those for such a long time. Then there were blood draws and IVs … I was just so tired. I was sad because I couldn’t see my dog and I couldn’t play my video games.” Ian said he really enjoys video games, and his younger brother Luke likes them even more.

The video issue was solved by PNRC recreation therapist Al Kaye, who found a game controller with a special foot control that enabled Ian to play the games he loved.

By the time he was discharged from Patricia Neal Outpatient Center at Roane Medical Center, Moore said Ian showed no deficits and was moving as if nothing had happened. “I was amazed, surprised and not surprised, and proud all in one,” she said. “Family and perseverance are always a recipe for success. He had both. He stuck it out and didn’t give up, no matter how hard it was.”

Ian has had his missing skull replaced with a prosthetic cover and finished outpatient therapy last February. He’s now 14, a freshman making straight A’s in high school, and says the only things that bother him are having to take blood thinners and taking special precautions against head injury. He’s also back to enjoying video gaming, Boy Scouts and volunteering at Camp Ozone, which named him “special guest of honor” at its annual Open Gates Day.

Others have celebrated him throughout his journey. His Boy Scout Troop presented him a “One Tough Cookie Award.” His elementary school presented a “Courage Award” at the end of his seventh-grade year. At the end of his eighth-grade year when Ian was about 95 percent recovered, his PE teacher awarded him the school’s Physical Education Award because “he never stopped trying.”

Ian says his ordeal “wasn’t the best experience” in his life, but he sees the positive side. “I think it’s made me to appreciate a good joke more and to tell them more often,” said Ian. “I really like to keep my friends happy and the people around me happy.”