John McDermid is looking forward to the summer days ahead. He has big plans 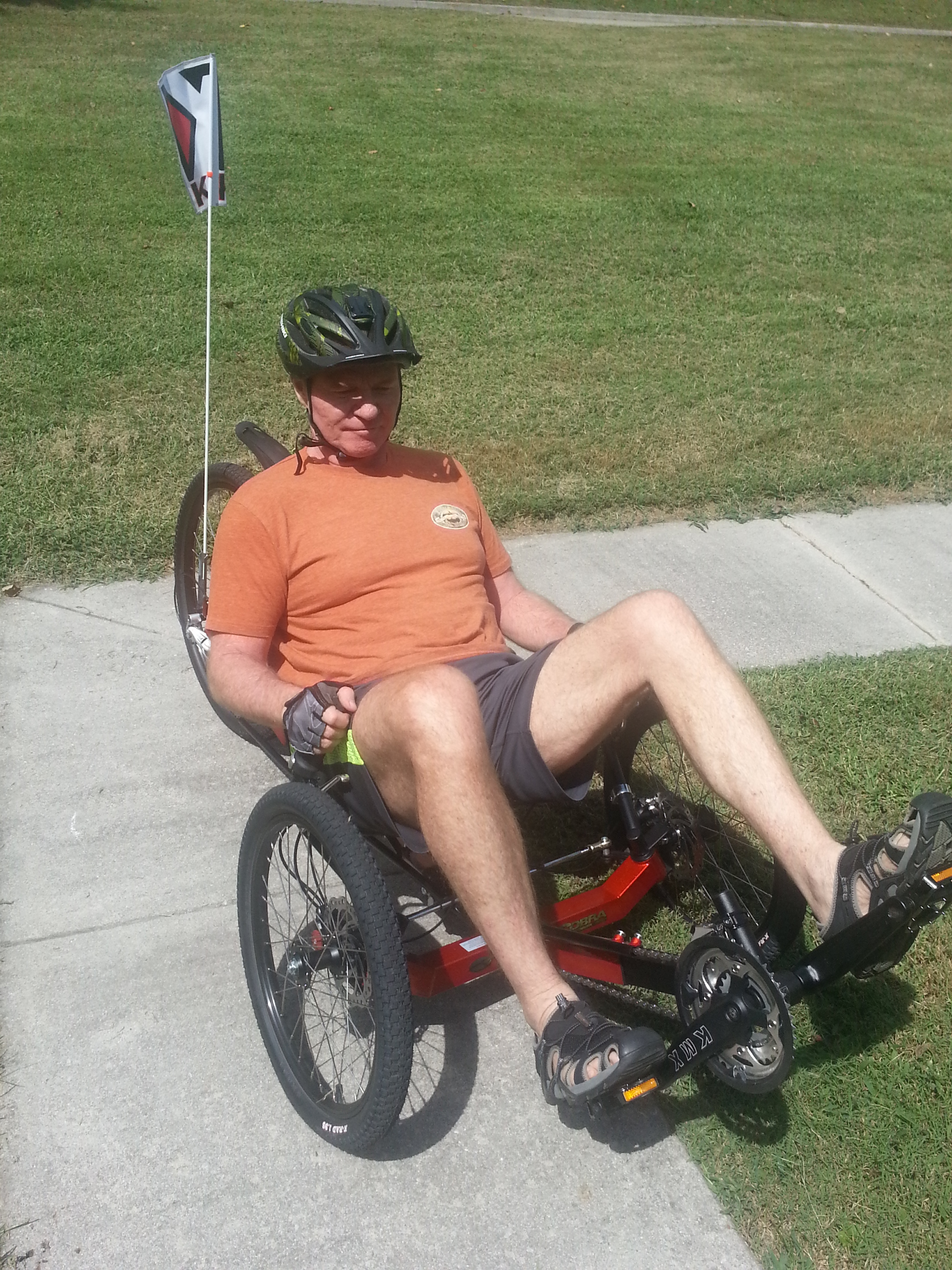 for his new recumbent trike.
“Plans are to ride every weekend on the trails around the area, if possible,” says McDermid, 57, who lives in Jefferson County, and works in Hamblen County. The recumbent trike is a multi-terrain vehicle McDermid can use on or off road, with an adjustable seat, rear wheel drive, and front two-wheel steering.
“It has a 28-speed gearing system like a typical mountain bike,” McDermid explains, “real smooth and comfortable.”
One of the most important features of the recumbent trike is its stability. McDermid is a stroke
survivor who, just a few years ago, could barely walk. Therapy at Patricia Neal Rehabilitation Center helped him get back on the road.
McDermid was at first misdiagnosed as having vertigo, then further symptoms were misdiagnosed as being related to the medication he’d been given. On October 14, he lost all use of his limbs, and his wife called 9-1-1 for an ambulance to rush him to Knoxville. The final diagnosis was vertebral artery occlusion with dissection, and stenosis of the basilar artery.
Surgery was deemed too risky, so McDermid spent three weeks in the hospital’s critical care unit. The whole experience caught McDermid off guard, because he never suspected he was at risk for a stroke.
Reviewing his risk factors at the time, there weren’t many to count. He’d dealt with a bit of hypertension, and there had been some family history of heart disease, but on the whole, McDermid had been doing all the right things to stay healthy.
“I would say I was in decent shape and good weight as I was cycling quite a bit at the time, feeling life was good at 57 years old,” McDermid says. “No idea that something like this would happen to me, but it was not your regular stroke, either.”
It was a different person who checked out of the hospital in November of 2014. John McDermid, very active and seemingly in good health just a month earlier, now required assistance to accomplish daily tasks.
“I could not walk,” McDermid says, “but was able to move my left limbs, having recovered some mobility on that side.”
McDermid was admitted to Patricia Neal Rehabilitation Center for two weeks that changed the course of his l
ife
. “I did three hours of therapy Monday through Friday, and one hour on Saturdays,” he says. “The physical therapist had me doing a lot of lower limb work like the balance bar, transferring from the wheelchair to the bed and back.”
Therapy took McDermid from the wheelchair to a walker, and from the walker to a cane. He was also challenged to master leg exercises, and walking on stairs. An occupational therapist worked on his fine motor skills like tying his shoe laces, getting dressed, and working with his hands.
“Speech therapy was by far the most challenging,” McDermid says, “but rewarding.” The speech therapy consisted of cognizant therapy, problem solving, multitasking, reading, and writing.
McDermid met every challenge, and one reason for that was the attitude of the therapists who were trying to help him. “Their compassion, work ethic, and dedication to their professions is so apparent that it makes you want to work as hard as humanly possible,” McDermid says. “They are all so positive that it’s infectious.”
Two weeks later he was released to outpatient therapy closer to home. “Wow, there was a huge transformation,” he marvels.
Faith, family, and friends gave McDermid the homegrown support and encouragement he needed to heal, and return to his life back home. PNRC gave him the tools to get there.
“I would most definitely recommend Patricia Neal Rehabilitation Center over any other place in the world,” McDermid says. “What they do is truly amazing, the therapy has been developed and tried, and it works.”
Stroke is the fourth leading cause of death and a leading cause of serious, long-term adult disability. To learn how Patricia Neal Rehabilitation Center is helping stroke survivors get their lives back, visit www.patneal.org, or call 1-800-PAT-NEAL (728-6325).