New Steps on a Continuing Journey

Although it’s been more than two years since Mela 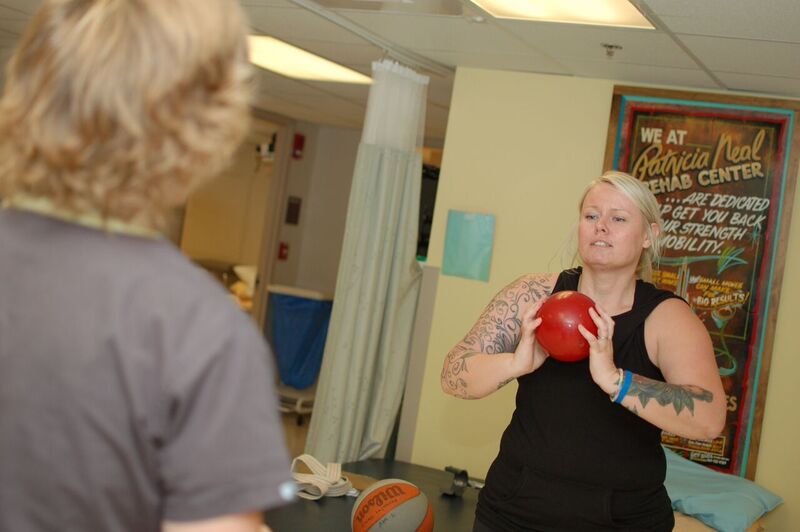 nie Kyte, now 32, was stricken with the neurological disorder Guillain-Barré Syndrome (GBS), she has not stopped working toward her goal of full recovery.

GBS is a rare autoimmune disorder in which the immune system attacks the myelin coating around nerves, causing weakness, pain and sometimes paralysis.

Kyte’s was an especially severe version of the GBS, which left her almost completely paralyzed in the spring of 2014, at the age of 29. Unable at first to walk, talk, or even feed herself, today Kyte has gained back all of that and more with help from therapists at Patricia Neal Rehabilitation Center.

“While I was in Fort Sanders, they told me that if anyone could help you, it’s Patricia Neal Rehabilitation Center,” said Kyte. “So I lived there for six months. They’ve really worked hard with me. I’ve had the same physical therapist, Tricia, (Erpelding), for the most part. But everybody’s always helping you, coming up with new ideas. They want to see people get better. I feel like I’ve got a bunch of cheerleaders over there,” she said.

After discharge, Kyte continued physical therapy on an outpatient basis, at first twice a week and now once a week.

“I took a break for a while, but I’m back. We’re kind of assessing where I’m at now, and what needs to happen to further my progress,” said Kyte.

Today the main focus is Kyte’s feet, which still have tingling and numbness from GBS.

“It feels like they’re asleep and are waking up,” said Kyte, as Erpelding rubbed an ultrasound therapy wand over the soles of Kyte’s feet and the sides of her ankles.

Ultrasound waves penetrate deep into the muscle and ligaments, to warm, relax and soften them. This improves circulation and aids in flexibility.

“If you don’t have strength in the muscles, different areas of the body can get stiff and tight,” said Erpelding, as she stretched Kyte’s feet upward.

Despite her great progress, Kyte has restructured her entire life around the effects of GBS. She was no longer able to work in her former job at Starbucks. In the fall of 2015 Kyte headed back to school to Maryville College, with help from the Blount County Vocational Rehabilitation Center.

“They work with people in area on disability,” said Kyte. “They’re paying for me to go back to school, and after that the plan is to get a job. I had already started college and had an associate’s degree in business when I got sick, so I changed it and went a different route. Now I’m doing psychology, with a concentration in counseling and a minor in sociology.

“Maryville College is small, and that’s easier because I don’t have to walk as far to class,” she said.

Kyte can also now hold and play with Hadley, her daughter, who was only a year old when Kyte got sick.

“Now she’s three, so she’s either extremely friendly, and sweet and kind, or having a tantrum,” Kyte said. “But she helps me, too – she’ll get things I can’t reach.”

Kyte said she would recommend Patricia Neal Rehabilitation Center to anyone facing a life-changing neurological illness. In addition to her physical recovery, Kyte said she has made friends with other patients at the center.

“When you become disabled, you have to relearn everything in life, it’s just a lot different,” she said. “I have no complaints – everybody at Patricia Neal has been perfect.”