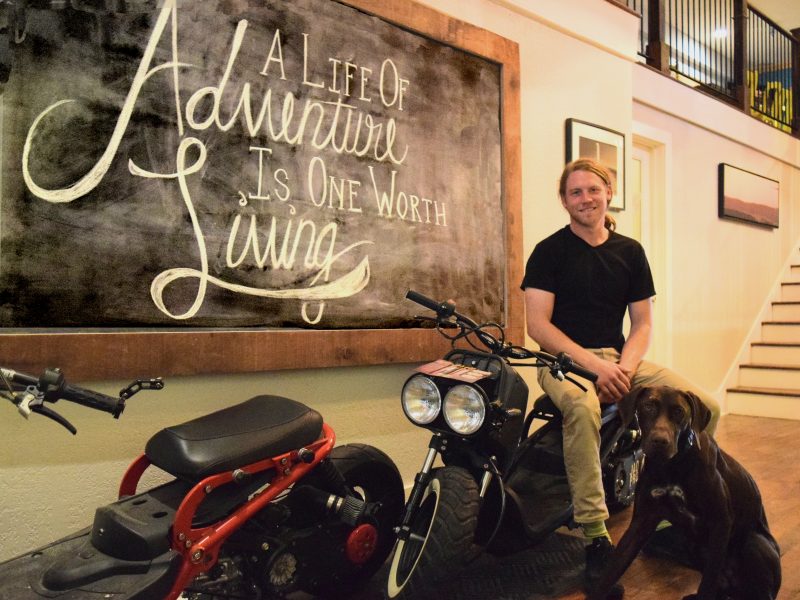 awford stepped off a ledge in a leap of faith – but instead he crashed 55 feet into rocky shoreline below, missing his anticipated water landing by a foot. The landing broke his back, ribs, and pelvis, and left his lower body tingling and unable to move.

“I understand that it could have been very different,” he said, seven months after therapists at Patricia Neal Rehabilitation Center at Fort Sanders Regional Medical Center helped him walk again. “To me, it was nothing short of a miracle that I could walk and my legs weren’t broken.”

He doesn’t really know why he decided to risk a leap from the deck of a friend’s remote lake cabin in North Carolina. But in August 2016 he took the plunge. “I had been playing guitar and I was playing a song that is a prayer about being caught up in the flow of life and moving toward your potential. . . I set the guitar down, stood up on the ledge, and . . . .” At that moment, the railing collapsed and Crawford fell into the rocks below.

Crawford hit the ground feet first, with a force that knocked the wind out of him. The impact drove his feet forward and his tailbone into jagged rock. It took a boat, ambulance and helicopter to get him to the hospital, where trauma surgeons had to dig bone fragments out of his spine. After eight days he was transferred to the Patricia Neal Rehabilitation Center at Fort Sanders Regional, where he stayed for 12 days.

“Mr. Crawford sustained multiple traumatic injuries including a rib fracture, pelvic and sacral fractures, but most significant was a lumbar vertebral fracture – a bone of the spine – which put pressure on his spinal cord,” said Jennifer Steely, director of clinical services.

Crawford received physical and occupational therapy to address core strength, lower extremity strength, sitting/standing balance, along with coordination, walking and self-care skills. He returned to work a month after the accident and continued twice-weekly outpatient visits through December.

The accident has inspired Crawford, a 29-year-old writer for a Knoxville media company, to begin several new projects. He’s producing a documentary about how people cope with traumatic experiences. There’s a conscious effort to grow in his spiritual walk. He and his brother are preparing for a half-Ironman, a triathlon comprising a 1.2-mile swim, a 56-mile bike ride and a 13.1-mile run, to mark the one-year anniversary of his injury.

“Some days are better than others, but I just take each day as it comes as a way to lean on the Father’s strength,” he said. “I cry a lot when I run because it’s all kind of overwhelming. I’ll even cry out, ‘Abba!’ sometimes – and He usually gives me a couple more miles.”