“You’ve Got to Have Grit” 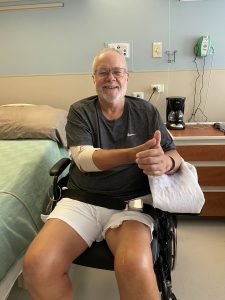 On an otherwise normal day on Aug. 9, 2021, the left side of Hal Rehorn’s face and body went numb. Both Hal and his wife Becky happened to be working from home. Becky remembers her husband calling her name in an unusually pronounced tone from the other room. She rushed to his side and immediately knew he was having a stroke.

An ambulance rushed Hal to Fort Sanders Regional Medical Center where he was given tPA, the clot-busting drug, to break up any blockages. He was stabilized and admitted to the hospital’s critical care unit.

With the left side of Hal’s body weak and immobile, he was eligible for admission to Patricia Neal Rehabilitation Center. Patricia Neal is East Tennessee’s premier rehabilitation hospital for patients who have suffered brain and spine injuries, and other neurological conditions like stroke. The facility is located within Fort Sanders Regional in downtown Knoxville. Hal was admitted to the rehab center and stayed for 17 days.

Sharon Glass, MD, is the physiatrist (a physician who specializes in rehabilitation medicine) who led Hal’s care team. “There are two kinds of strokes that can occur in the brain,” explains Dr. Glass. “There is small vessel disease and large vessel disease. Mr. Rehorn had small vessel disease, which affected a small core of nerves and fibers. Think of a small mass of deceased cells in the back of the brain that won’t recover. However, many of the surrounding cells are in shock; they are receiving less blood flow but are still alive.

“Every space that regains blood flow has a greater chance of recovery,” she says. “It all depends on the size of the stroke, medical history, how much has been damaged and how much is getting circulation.”

Dr. Glass explains the goal for staff at Patricia Neal Rehab Center is teaching patients how to do as much as they can do safely in their current condition, as well as practicing movements repeatedly to help with recovery. She says that when primary pathways are disrupted – think of not being able to move an arm or leg in the usual way – patients must practice movements to stimulate secondary nerve pathways in the brain to make the movements easier over time.

“As long as you’re doing things to stimulate the part of the brain you want to work on, there’s a possibility to get better,” says Dr. Glass. “It’s never a guarantee, but it’s important never to give up.”

Hal had a team of therapists who helped him with bathing, dressing and general movement to make him more confident before he went home. He had no movement in his left arm or leg when he arrived, so slow, deliberate movement by the time he left was a victory.

About the staff, Becky recalls, “Everyone who cared for us, you could tell they loved their job. They remembered our names, and they just really cared for him and wanted to see him heal. It seemed like they weren’t just doing a job, but doing something they were built to do.”

Since coming home, Hal has continued to progress in his physical ability and his speech through outpatient therapy. While he lost some of his speech ability in the stroke’s immediate aftermath and is sometimes slow to speak, he is cognizant and can communicate. He uses a wheelchair at home and is able to transition from the bed to the chair, and he can stand with assistance.

“He’s making great strides, and we are seeing it,” says Becky. “He was able to make these little movements when we left Pat Neal, like these microscopic movements in his left thumb. Now, our 2-year-old grandson can say, ‘Thumbs up, Poppy!’ and Hal can give him a full thumbs up, which is huge.” 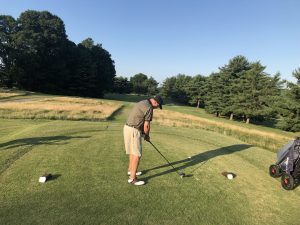 Residents of Jefferson City, the hard-working couple are avid golfers. “We love to golf, and that is one activity he is looking forward to doing again,” says Becky. The couple has a blended family of six children and seven grandchildren, plus one on the way, who are bright sources of joy and light in their lives.

Hal continues outpatient therapy and is working on getting used to using his left side again. “Our lives have been upended,” says Becky. “We have been given these obstacles, and you’ve got to have grit to overcome them, and you also have to encourage yourself. If you want to survive any traumatic event, I believe that you can with some grit and a positive frame of mind. And with that, I believe there’s nothing you can’t do.”